With lessons learned from years of LED street light conversions, specifiers and communities are focusing on additional benefits, including livability and visual comfort. This is leading to increased demand for glare control to benefit pedestrians, cyclists, motorists and residents. With this increased demand, there is also a need to properly evaluate street light luminaires with regard to visual comfort.

The IES recommended practice for roadway lighting (RP8-14, annex B) defines glare into two categories: disabling glare and discomfort glare. Disabling glare, by definition, can result in reduced visual performance. Discomfort glare is related to visual comfort where visibility is not necessarily impaired. The considerations discussed here are regarding discomfort glare.

A starting point for evaluating glare are the BUG ratings as defined by IES TM-15. The “B” and “U” ratings are metrics for quantifying backlight and uplight respectively. The “G” portion of the BUG rating is specific to glare and is expressed on a 1 through 5 scale. The G rating is based on zonal lumens in the high angle zones (FH, BH) and the very high angle zones (FVH, BVH) shown in Diagram 1. There are defined allowable lumen values, for each zone, that correspond to a numerical G rating.

Residential applications of LED street lights generally call for lumen packages in a range for 3000 to 5000 lumens. In this lumen range, most street light luminaires would have a G rating = 1. That is, most street light optics would distribute the high and very high zonal lumens below the limits required for this rating.

The G rating is useful as a first cut, but has limitations as a metric for glare since it is based only on zonal lumens. Luminance uniformity should also be a consideration, specifically the uniformity of the light source. In the case of an LED street light, this would be the brightness uniformity as light is emitted from the light engine and associated optics.

The IES Recommend Practices for Roadway Lighting (RP8-14, Annex B) and Lighting for Exterior Environments (RP-33-14, Sec. 2.3.1) both mention non-uniform luminance as a cause for discomfort glare. The IES does not currently recommend a metric for source luminance uniformity as it relates to glare. However, test installations can be used to subjectively evaluate sample luminaires with regard to luminance uniformity and the effect on visual comfort.

The concept of source luminance uniformity is illustrated in Diagram 2. Cross sections of two light engine designs are shown. Row 1 illustrates a conventional light engine that uses a single optic to control the light. Row 2 shows a two-stage design with a secondary refractor lens to control glare.

The right columns shows a graphic representation of the source luminance that an observer would see from 70○ viewing angle shown in Diagram 1. The output from each source is 5000 lumens. Row A shows defined spots of high luminance emitted from each LED. Row B shows more uniform source luminance with softened pixelation, which increases visual comfort. This difference is not captured in the G rating which is 1 for both cases. 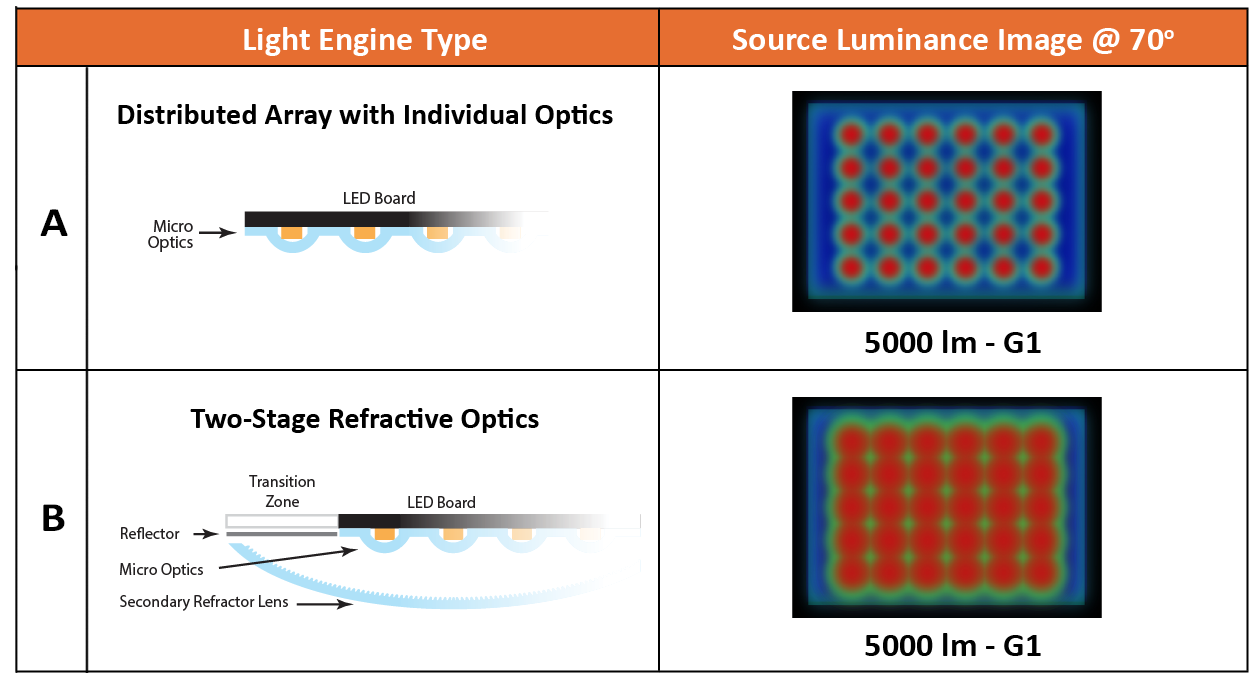 Leotek is working with the IES as well as lighting industry professionals to develop better metrics for evaluating discomfort glare.

U.S. Department of Energy
Get the Facts: LED Street Lighting